Motorisation of the Imperial German Army began in 1899 when the first truck and the first passenger car with internal combustion engine were tested for their military usability. The development picked up speed from 1908 when the first comparative trial runs were held to find suitable subsidy truck models for the role of Armeelastzug (truck-trailer combination). After war had broken out, the solo truck took over this role of supplying the Kaiser's troops on all frontlines.This publication tells, for the first time ever, the story of how the Lastkraftwagen (cargo truck) became the backbone of German military supply operations in World War One. The creation and organisation of the Kraftfahrtruppe (Army Motor Transport Corps) is extensively portrayed in text, followed by richly illustrated chapters on the trucks of individual manufacturers. These include major players such as Benz, Daimler and Opel; truck-building legends such as Büssing, Horch, Mannesmann-Mulag and Stoewer - names that today have all faded into history; and also enigmatic makes such as Ageka, Komnick and Windhoff, to name just a few. Additional chapters on wartime service, as well as uniforms, complete the survey of this early era of German military motoring in hitherto unseen completeness.In a total of 192 pages, distributed over two volumes, this publication is lavishly illustrated with 380 photographs and illustrations, the vast majority of which have never been published before. 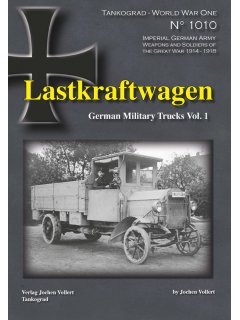