The Six-Day War in 1967 was a lightning Israeli campaign that changed the face of the Middle East. Israel's armoured brigades, despite being heavily outnumbered on paper by Arab AFVs, managed to dominate the Arab forces tactically and technologically, through excellent gunnery and decentralized battlefield leadership. The fighting took place on three different fronts: the Sinai Front, the Jordanian Front and the Golan Heights. Each presented its own unique set of tactical and terrain challenges, from the long-range battles between massed Egyptian and Israeli armour in the scorching flatlands of the Sinai Desert, to relatively close-quarters engagements across steep and narrow terrain in the Golan Heights.

Not only did the Six-Day War see the direct clash of opposing Cold War tactical approaches, but also the direct confrontation of Western and Soviet MBTs. On the Israeli side, the IDF had the British Centurion, the American M48 Patton, the M51 Super Sherman, and the French AMX-13, although they focused their armoured spearheads on the Centurions and Pattons. The Arabs' armoured power was expressed through T-34/85s, T-54/55s, PT-76s and JS-3s (IS-3s). Each vehicle brought its own set of advantages and disadvantages, although ultimately it was the long-range tank-killing gunnery of the Centurion that often took the day.

Drawing on compelling first-hand accounts from both unit commanders and individual crews, this Duel title explains the tactical and mechanical dynamics of one of history's greatest post-war armoured engagements. 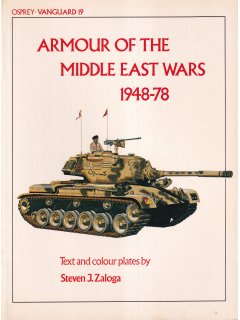