Tom Gannon is well known for his research and writing on Israeli military vehicles. Trackpad are very proud that Tom has chosen to continue his work on the subject with us.

This is the second volume of two giving a comprehensive look at the unique Israeli Sherman-based Artillery vehicles. The book looks at these unique vehicles beginning with  the improvisations forced upon Haganah and the fledgling IDF in the late 1940s and onwards.

The two volumes discuss the contribution of primarily, self-propelled artillery in the development of TZAHAL (Tsva Ha’Haganah le’Yisra’el, Hebrew for Israel Defense Force or IDF), as it was paired with another significant part of IDF history, the Sherman tank.

This subject is best understood by also discussing what came immediately before the Sherman-based artillery weapons in IDF service. Actually, the use of weapons more powerful than rifles and machine guns in the region pre-dates the establishment of TZAHAL which did not occur until May 26, 1948, nearly two weeks after independence. 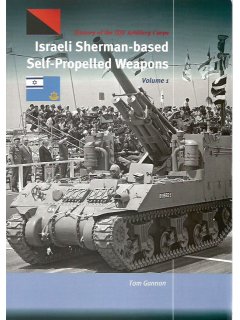 Tom Gannon is well known for his research and writing on Israeli military vehicles. Trackpad are ver..